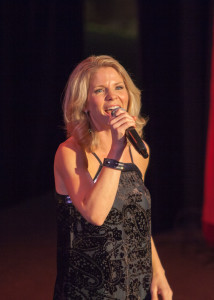 Kelli O’Hara lends her voice to help children who stutter with Jan. 16 concert, May gala

Kelli O’Hara Headlines a Concert for SAY: The Stuttering Association for the Young

Seventeen years ago, long before she made her Broadway breakout in “The Light in the Piazza,” Kelli O’Hara met Greg Naughton, the man she would marry.

That spring, Naughton invited her to a gala for Our Time, a nonprofit for children who stutter, since renamed SAY: Stuttering Association for the Young.

O’Hara says she wasn’t prepared for the feeling she got that night, watching youngsters summon their courage to face — and conquer — their fears of speaking in public.

It’s a feeling she still gets each May at the gala that is always circled on her busy calendar.

“It was that feeling that I had of watching these people not be able to say their own name, but then get some music under them and support under them and be able to sing a song or rap or dance or say a piece of poetry with such freedom,” she says. “Something happened in me.”

Her voice has been her life, O’Hara realized. And watching those kids struggle, but then eventually “open that door,” moved her. “I take away more from those nights than I could ever give,” she says. “It just reminds me of how lucky I am and how I want to help them.”

O’Hara has certainly helped, appearing at 13 or 14 of the SAY galas and serving as the gala emcee a half-dozen times. She’ll rearrange her work schedule to make sure she’s there.

On Jan. 16 —  with the May 11 gala still four months away — O’Hara returns to Irvington Town Hall Theater for a SAY benefit concert to perform show tunes from her Broadway career. Consider it the winter warmup for the spring gala.
View Article