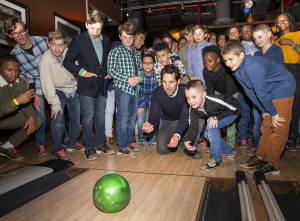 And Paul Rudd hosts a celebrity bowling tournament for Stuttering Association for the Young.

Paul Rudd, the 50-year-old actor celebrated as ageless by countless memes and BuzzFeed listicles, stood in a line of children Monday night, hoisting a blue bowling ball and smiling for the cameras. He was at the Lucky Strike bowling alley on West 42nd Street for his all-star tournament to benefit SAY, the Stuttering Association for the Young.

“It’s hard being a kid, it’s hard suffering with a stutter,” Mr. Rudd said, who was dressed casually in a sweater and button-down shirt. He became involved with SAY after meeting its founder, Taro Alexander, to play a character who stuttered in “Three Days of Rain” on Broadway in 2006.

More than a dozen of Mr. Rudd’s actor friends showed up, including Brandon Victor Dixon, Daphne Rubin Vega, Alysia Reiner, Geneva Carr and Alex Brightman, who were assigned to be “lane captains.” And why a celebrity bowling tournament, which seems like a retro plot device out of “The Honeymooners?”

“I did another event many years ago for a children’s hospital and it started as a poker tournament,” Mr. Rudd said. “But what kid can play poker? So we scrapped that idea and started bowling, which is a great event because lots of people can do it. And the kids are having a blast.”

The event raised about $90,000 for SAY’s summer camp, though the children were too excited by the food and games to think that far ahead.

“Don’t try to go healthy at a bowling alley,” said Rachel Dratch, the comedian, as trays of sliders and breaded mozzarella sticks were delivered to the lanes. “Get the fries or the chicken fingers, don’t order a salad.”

Mr. Rudd added: “If you’re getting something like pizza or chicken fingers, just make sure to take advantage of the hand sanitizer stations, because apparently the three holes in a bowling ball are the filthiest places on earth.”

“So I would suggest doing that before digging into the calamari,” he said.