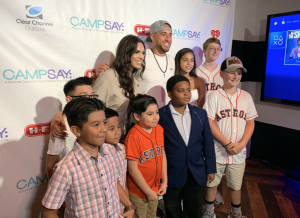 The 5th George Springer All-Star Bowling Benefit raised more than $250,000 on the evening of June 27, with the proceeds going toward sending economically disadvantaged kids who stutter to the SAY summer camp (SAY stands for the Stuttering Association for the Young). As most Astros fans know, our American League starting All-Star slugger grew up stuttering and now is the SAY national spokesman.

The annual event at Bowlmor on Bunker Hill Road drew an array of local celebrities like Channel 11 anchor Ron Trevino, Channel 2 sports anchor Lainie Fritz, and Houston Dynamo legend Brian Ching. After some poignant speeches by remarkable kids (including one with a show-stopping singing voice), Houstonians bowled for a good cause. (I was an honorary lane captain.) Complimentary refreshments included pizza, pigs in a blanket, and fried mozzarella sticks.

Many of the Astros came to lend their support to Springer’s effort — think José Altuve, Carlos Correa, and Lance McCullers Jr. — and throw a few bowling balls into the gutter. (Stick to your day and night jobs, guys.)