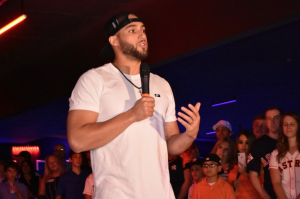 When Major League Baseball asked Houston Astros outfielder George Springer if he wanted to be mic’d up during the All-Star Game, he quickly accepted. That might not seem like a difficult decision for most players, but it was significant for Springer.

Springer grew up with a “fairly severe stutter,” and underwent years of speech therapy to manage it when he was younger. During Tuesday night’s All-Star Game, Springer spent the entire bottom of the third inning talking to the broadcast booth while he was playing left field.

It’s far from the first time Springer has spoken about the issue. Since 2014, he’s been a spokesperson for Stuttering Association for the Young (SAY). For the past three years, he’s hosted a yearly bowling event for the organization.