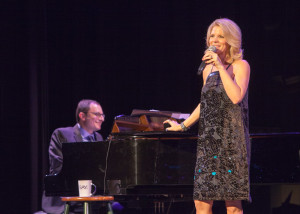 Kelli O’Hara will be returning to Irvington, NY, for an enchanting solo concert to benefit The Stuttering Association for the Young (SAY). The concert will take place on Thursday, January 16th, 2020 at the Irvington Theater (85 Main Street, Irvington, NY), in Westchester County, a short train ride from New York City.

The benefit performance will feature Ms. O’Hara, one of Broadway’s greatest leading ladies, in a special, intimate evening of song and celebration, featuring Broadway favorites, standards, new musical theater selections, and more! Kelli is an avid supporter of SAY: The Stuttering Association for the Young (www.say.org), hosting their Annual Benefit Gala each spring, sharing the stage with the kids of SAY often, and always going above and beyond to advocate for these inspiring young people. Proceeds from this special benefit concert will support families-in-need, and help SAY underwrite over $1,500,000 in Programming Costs and Financial Assistance this year.

Kelli O’Hara was recently hailed by The Times as “Broadway musical’s undisputed queen.” Her portrayal of Anna Leonowens in the critically acclaimed revival of The King and I garnered her a 2015 Tony Award. Kelli also received Tony nominations for her roles in Bridges of Madison County, Nice Work if You Can Get It, South Pacific, Pajama Game, Light in the Piazza and has been nominated for 2 Grammy Awards. Kelli returned to the Metropolitan Opera this past spring as Despina in Cosi Fan Tutte.