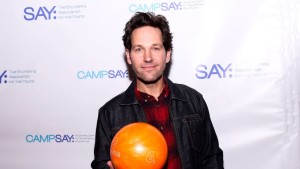 Paul Rudd Chat at His Bowling Benefit for SAY

On Monday, November 11th, The Stuttering Association for the Young (SAY) hosted their 8th annual ‘Paul Rudd’s All-Star Bowling Benefit,’ at Lucky Strike in NYC. The event raises funds in support of SAY’s mission to help young people who stutter find a sense of community and acceptance for their stutter. Paul Rudd being a big advocate for SAY hosted another year of this great event to bring awareness to people who stutter and raise funds so that way SAY can continue to help young people.

This event was something very different than anything we’ve seen. Everyone was first taken to a backroom to kickoff the event. Guests gathered around in a circle and the night was kicked off with a touching speech by SAY Founder, Taro Alexander.  In his speech he mentions how his stutter impacting his life, especially in his youth, and how he desperately wanted to have a friend growing up who stuttered as well. And his mission with SAY is to bring young people who stutter together that way they can form their sense of community and develop friendships with each other that he wished that he had growing up.  After his speech, the people at SAY did this hype-up activity where everyone danced and chanted in order to get their energy up to bowl and have a nice night out.

Shortly after this was done, guests got a chance to mingle, eat and drink, and bid on some of the items up for auction. But it wasn’t long until guests were invited to the bar area to listen to a special speech and performance.  To start it off, Paul gave a very touching speech on why this night means so much to him and how he got involved in SAY. Essentially, Paul was doing research for a character he was going to play who had a stutter. That is how he met SAY Founder Taro and how he started getting involved in his organization. 8 years later and this event has continued to go strong. Next, Taro came up to give a speech and told everyone that all the money that is raised today is geared towards sending children to Camp SAY, a two week summer camp which provides special programming for kids and teens who stutter included speech therapy and creative arts curriculum. On that note, he mentioned that they have a special song that they sing, and to help share that song, he invited Brandon Victor Dixon to the stage. Here they sang a spinoff of Christina Aguilera’s ‘Beautiful’ that made it all about inclusivity with people who stutter.

This event as a whole was a beautiful event that celebrated youth who stutter as well as brought needed attention to it. It was definitely a night to have fun, let go, and enjoy each other’s company while trying not to get a gutter ball while bowling.

Check out our interview with Paul Rudd here:

The Knockturnal: Congratulations on another year of throwing this event!  What’s it like hosting this event again?

Paul Rudd: It’s such a fun event.  It’s kind of great because a lot of kids in the organization get to bowl.  So, there’s a real feeling of celebration and it’s just a fun night out.

The Knockturnal: What’s it like seeing all these kids come out and have fun in a space that makes them feel so comfortable?

Paul Rudd: It’s the best.  It’s such a fun thing to be able to hang with these kids.  And also since I’ve been doing this every year, a lot of these kids started with SAY when they were really little.  And I have seen many of them grow up and go to college.  I have a bit of this proud parent feel towards a lot of the kids.

The Knockturnal: And as for this being a bowling event, are you a good bowler?  How would you rank your skills?

Paul Rudd: I’m an okay bowler.  I’m always so busy at this event that I never get a chance to bowl.  Which I’m okay with.  I think I’m not so good that I would feel totally comfortable bowling in front of all these professionals.  But, bowling is one of those things, where I always wondered, is bowling one of those things that you want to be really good at?  Or do you just want to be pretty good at?  You want to be competitive and don’t want to embarrass yourself.  But, if you’re really, really good at bowling, that means you bowl a lot.

Paul Rudd: Well, I was just in this show called ‘Living With Yourself’ and I’ve been doing this long time press tour.  But now it’s winding down and I’m excited about it.