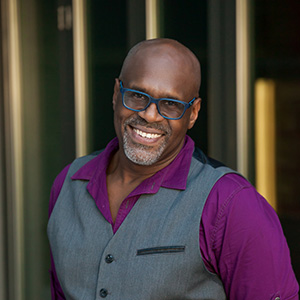 Everett Bradley is an Indiana University School of Music graduate and a Grammy-­nominated artist who has lived and worked in New York for nearly 30 years. He has toured, performed and recorded with artists such as Carly Simon, Bobby McFerrin, Quincy Jones, Hall & Oates, Bruce Springsteen, and Bon Jovi. Everett topped the European charts with his dance classic, ‘I Luv U Baby’, and his solo CD’s have received rave reviews from both Billboard and People magazines.

Everett’s other passion lies in the theater. He was the first American performer/director of the Off-Broadway show, STOMP. He starred, co-wrote, arranged, and won a Theater World Award for Broadway’s hit musical SWING, and was a featured performer in Broadway’s After Midnight. Most recently, Everett received critical acclaim for his reimagined orchestrations of a new urban version of 42nd Street for the Drury Lane Theatre in Chicago and the Ordway Theatre in Minneapolis.

In 2014, Everett made his TV debut as the bandleader/composer for the NBC show, The Meredith Vieira Show. You can catch him every holiday season touring with his festive/funk hit show, HOLIDELIC.

Everett will spend spring and summer 2020 touring with Bon Jovi.