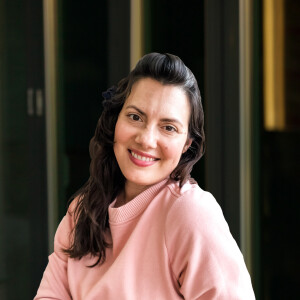 Leigh Pennebaker, Co-Founder of SAY: DC, has been involved with SAY since the lead-up to its founding in 2001. She graduated from Millsaps College earlier that year with a BA in Studio Art, a background that prepared her to serve as the costume designer of the very first SAY shows, while also volunteering her time as a teaching artist and member of the backstage crew. Over the subsequent decades, she has taken on many roles with the organization, and her favorite job of them all has been working as Director of Art at Camp SAY. Since the summer of 2016, Leigh has found the perfect balance of creativity and community at Camp SAY. Camp brings out young people’s openness to try new things and experiment with materials and techniques. It also fuels their eagerness to work together to create something beautiful and unexpected. Seeing kids inspire each other, bravely venture into unfamiliar territory together, surprise themselves with their own abilities, and ultimately get hooked on the creative process reminds Leigh of why she follows the path of the Artist, herself.

Leigh grew up around art and artists and all her life she has avidly loved to draw and paint. In her early twenties, she became fascinated with wire as a medium and used it to create a series of sculptures based on her fascination with fashion design and figure drawing. In 2004, her sculpture was discovered by Simon Doonan, legendary window-dresser and Creative Ambassador-at-Large of the New York City-based clothing store, Barney’s. Doonan commissioned her to create dozens of custom wire sculptures for the windows of Barney’s flagship Madison Avenue store. Around that time, her work also popped up in the windows of Saks Fifth Avenue in NYC, Calypso (Lower East Side), Fragments (Soho), Shreve Crump and Lowe (Boston), and in print in the pages of the Bergdorf Goodman beauty catalogue and House and Garden Magazine, among other publications. Her work was included in several group shows in New York and Provincetown, and was displayed on the walls at the The Daily Show: With Jon Stewart. Leigh’s work is in numerous private collections across the US and Europe.

Becoming a mother to three wonderful humans opened up a world of new creative interests and understanding. As a parent, Leigh’s passion for babywearing and her eye for color, design, and craftsmanship led her to work as a consultant, designer, and brand strategist for boutique baby carrier company, Sakura Bloom. After six years there and working her way up to the role of Vice President, she left in 2016 to pursue independent projects and re-focus on her own creative endeavors. In 2018 she co-curated an exhibit in Brooklyn that featured work by women artists exploring themes around motherhood. In 2019 she Co-Founded SAY: DC with Taro Alexander.