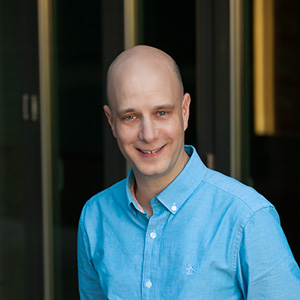 Taro Alexander has stuttered since the age of five, and truly understands the physical, social, and emotional impact of stuttering. In 2001, Taro fulfilled his life-long dream, establishing SAY to help transform the lives of so many young people who stutter. In 2008, Taro launched Camp SAY to provide kids and teens with another transformative, confidence-building experience. Taro is the passionate force behind SAY and inspires the important work that we all do each day.

Taro is widely recognized for his work with people who stutter and has led workshops, master classes, and performances across the world. Taro received the Charles Van Riper Award in 2002 from the National Council on Communicative Disorders and was the keynote speaker at the 2005 National Association of Young People Who Stutter (FRIENDS) Conference. In 2019, Taro was the recipient of the Annie Glenn Award, bestowed by The American Speech-Language Hearing Association. Taro has also been featured on NBC Nightly News With Brian Williams, CBS Sunday Morning, NPR’s All Things Considered, The Today Show, WNBC, and in the New York Times, Chicago Tribune, Washington Post, and Associated Press. An accomplished performer, teacher, and director, Taro’s artistic impulses were encouraged by his parents at an early age, and his interest in contributing to social change was greatly influenced by the work of his father, the late Bobby Alexander, who founded the legendary Living Stage Theatre Company in Washington, DC. At 19, Taro was cast in his first professional role in the national tour of Neil Simon’s Lost in Yonkers and enjoyed a successful performing career, including four years in the smash show STOMP, plus appearances on NBC’s Law & Order. Taro is married to the incredibly talented Leigh Pennebaker, and has three amazing kids.